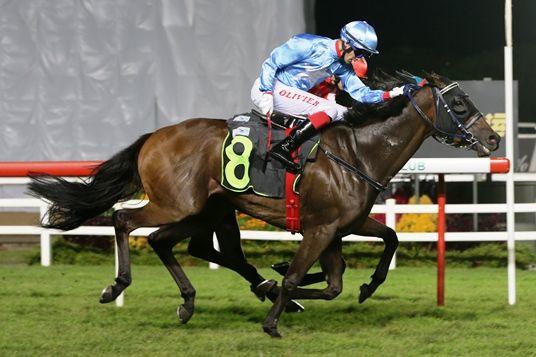 French jockey Olivier Placais claimed the riding honours at Friday’s Kranji night meeting with a riding hat-trick that he achieved right at the last stride in the very last race.

Placais, who only made a riding comeback from a chest injury two weeks ago on February 23, saluted earlier with $77 outsider Istana in the $20,000 Maiden race over 1800m before capping the memorable outing in the last race, the $45,000 Class 4 Non Premier race over 1400m aboard Little Big Man.

Little Big Man (Olivier Placais) gets up by a short head from Nova Classic (Troy See, obscured) on the line.

“It’s nice to ride a first winner for Lee. I was supposed to ride another horse for him last month but I got injured,” he said.

“Lee has prepared this horse (Little Big Man) very well as I could tell he was very switched on the moment he jumped. I was told he is a bit lazy and I had to ride him hard, but he landed in a handy spot (fourth) quite easily and he was quite relaxed thereafter.

“I had plenty of horse underneath me coming to the home turn, but I wanted to make sure I had him off the bridle before the others as I wanted to take the race to them instead of me having to chase them and getting outsprinted.

“The leader (Nova Classic) was some distance in front, but my horse kept chipping away at the margin and just got there in time.

“He will sleep well tonight.”

The Falcon Racing Stable-owned son of Showcasing did not show up at his last start when 10th to Hongchen in similar company but over a mile, but Freedman had got the right formula this time around.

“He ran over the mile last time and had a bad gate. We rode him quiet and he did not fire,” said the Australian mentor.

“We chose Olivier for the ride as he’s the type of horse who needs an aggressive rider. His form before was pretty good actually, and tonight he found the line hard.”

Sent out as the joint $21 favourite with Paragon Star (Benny Woodworth) and Big Wave (Nooresh Juglall), Little Big Man was always in touch with the early speed set by Nova Classic (Troy See), settling in a one-out one-back spot.

When Nova Classic rolled off upon straightening, Paragon Star was being hailed the winner when he drove through like a hot knife through butter, but he soon petered on his run.

Nova Classic reclaimed the lead and was well on his way towards a second win for trainer Alwin Tan following his triumph with Super Fortune, but Placais had other ideas. Living up to his reputation as “The Conductor”, Andre Fabre’s former apprentice jockey wielded the persuader in his unique high-handed style, driving Little Big Man over the line to nut Nova Classic out by a short head.

Paragon Star weakened late but still held on for third place another 3 ¼ lengths away. The winning time was 1min 23.13secs for the 1400m on the Long Course.

Little Big Man has now taken his record to three wins and seven placings from 26 starts for prizemoney that has shot past the $165,000 mark for his Thai owners.