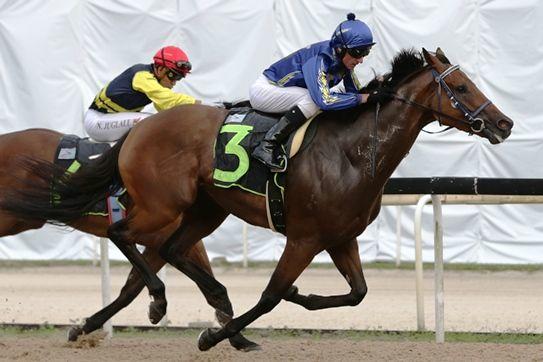 The much-improved Augustano scored another barrier-to-box win on Sunday, with both trainer Lee Freedman and jockey Glen Boss, however, saying they would prefer him to come off the pace in the future.

An all-the-way winner for Boss at his last start in a Class 3 race over 1200m three weeks ago, the Thai-owned Hard Spun three-year-old landed in a similar spot in the $80,000 Class 3 race over 1100m, but more by default than anything else.

The Cliff Brown-trained Baffert was the first to show the way, but jockey Nooresh Juglall looked happy to just enjoy an economical run on the rails. From three off the fence, Augustano, who was backed down to $16 joint-favouritism with Gran Torino, soon came matching motors on the outside, with Boss looking at least six times to his inside as they glided to the front without really working for it.

Augustano (Glen Boss) puts paid to his rivals in the Class 3 race on Sunday.

It wasn’t long before more company came. At the halfway mark, trainer James Peters’ impressive first-up winner Gran Torino strode alongside within his girth, obviously not in a hurry to press on further, with jockey Olivier Placais sitting pretty and presumably waiting for the home straight to fully test his mount.

That scenario was indeed played out as Augustano went for broke at the top of the straight with Gran Torino immediately set in hot pursuit, but it soon became evident the son of Bel Esprit would not be gathering the leader in 300m out.

Finding another length or two once Boss gave a squeeze, Augustano opened up to a sizeable break, but which was still within harm’s way from a trio of challengers made up of Himalaya Dragon (Wong Chin Chuen), Baffert and Imperial Win (Craig Grylls), later to be joined by the late swoopers Star Genius (Zawari Razali) and Lucky Stride (Benny Woodworth) for a five-way go for the minors.

Augustano did not let up, though, hanging on to his lead to go and salute by three parts of a length from former stablemate Baffert, a head clear of Star Genius who won the battle for third place by a neck from Imperial Win.

Lucky Stride ran fifth another short head away while gallant mare Himalaya Dragon wilted late to take sixth spot another length away. The winning time was 1min 6.25secs for the 1100m on the Polytrack.

“He was impressive at his last win, but it was not the plan to lead today as I wanted him to come back for us since he was getting back in trip,” Freedman revealed.

“Still, it was a very good effort from him, as I’ve learned here that it’s a big ask for those three-year-olds to go to Class 3 level and win.”

“He’s not that effective on turf, but all the horses work on Polytrack here. He was not at his absolute best when I took him, so I won’t mind taking him to the first Leg,” he said.

In a three-year-old crop that has yet to hatch any standouts, Augustano may not be entirely out of his depth, especially if he is made to take a seat, according to Boss.

“He is a good-looking individual. He wants to please all the time,” said the experienced hoop.

“I told Lee he’s an impressive sort but he’ll become more impressive when the class gets better. He has an amazing turn of speed which I think will be better utilised if we put him away in a race.

“When he is in front, he’s one-paced, it’s not ideal. Lee’s got a high opinion of this horse and I’d like to see where he goes from here.”

Prizemoney-wise, Augustano has certainly come a long way, more than recouping his initial price tag of A$110,000 with close to $200,000 already collected from his four wins and two seconds.